From remotely operated vehicle footage collected over the last 20 years, MBARI researchers have gleaned the most complete look at how the vampire squid feeds in the wild.

Surprisingly little is known about the creature whose scientific name translates into vampire squid from hell.  When it comes to their behaviour, researchers say their knowledge is still very sketchy.

But, from remotely operated vehicle footage collected over the last 20 years – approximately 24 hours of continuous video – researchers from the Monterey Bay Aquarium Research Institute in the United States have gleaned the most complete look at how the vampire squid feeds in the wild.

“They feed on dead, organic material that falls through the water column,” Henk-Jan Hoving, study co-author and postdoctoral researcher at MBARI, told Science-Fare.com.  “This behaviour is unlike any other cephalopod.”

It’s commonly called marine snow – scientifically it’s known as detritus – and the falling bits include parts of crustaceans like their eye balls and antennae, along with mucosal structures secreted by larvae, plankton and of course, poop.

The squid made famous by Matt Taibbi catches food with a built in tool that’s as unique as their diet is.  Using one of its two retractile filaments – they’re basically a modified pair of arms that look like trawling lines – they’re cast out and the vampire squid wait for the falling fare to get stuck.

“When you look at vampire squid in situ – in their natural habitat – you can see that the filament’s very long,” Hoving said.  “The animal’s basically able to extend it up to eight times the [length] of its body.”

As the filament’s reeled back in, the researchers found its other eight arms pick the food off before it’s all bound together with another snot-like substance that’s dotted with red cells – it also happens to glow in the dark.

It wasn’t until researchers got the creature back into the lab that they found the food was actually getting stuck in hairs on the filaments.

“These could only be seen very briefly after the capture of a living animal, so you have to be very quick,” Hoving said.  When researchers dropped food directly on the squid’s hairs, it retracted and retrieved the fare just like it did in the ROV footage.

“Previous authors have described their weak musculature and [unique] radula,” Hoving said.  “This fits nicely with our finding that they feed on marine detritus.”

Without hairs, previous researchers surmised the filaments acted more like trip-lines – they even showed that to be the case in their experiments.  But, nobody took a good look at them.

“Vampire squid have mostly been studied when they came up in a trawl,” Hoving said.  “The filament was always retracted, so it was just this little convoluted structure.”

Turns out, they’re quite complex.  Under a microscope, researchers found sensory, nerve and muscle cells that work together to extend and retract the filament.

Their suckers also had a story to tell.  Under the microscope, researchers found the cells that secrete the red-dotted mucous used to bind their meal together – they never found its blood-funnel though.

Most of what we’ve learned about vampire squid – scientifically, they’re known as Vampyroteuthis infernalis – has been related to adaptations that allow them to survive in the oxygen minimum zone.

In order to efficiently filter that little bit of oxygen out of the environment, the vampire squid have a respiratory protein called haemocyanin – humans filter oxygen with haemoglobin after it’s breathed into our lungs.

They’re also neutrally buoyant – they don’t sink or float in the water – so they can just drift with the current.

“This allows them to save energy because they don’t have to hunt for food,” Hoving said.  “It also allows them to really reduce their metabolic rate, which is another energy saving strategy.”

The common ancestor that links the vampire squid to the rest of the cephalopods – the class of creatures that includes squids, octopuses and cuttlefish – was probably a cephalopod with ten arms.

How those arms changed through time has dictated where they fall in the family tree – and the vampire squid sits on its own branch, alone.

The research was published in the journal, Proceedings of the Royal Society B. 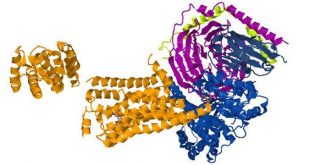